My Life And The Doctor, by Simon Pearce

Hello, Doctor Who fans! We all know the effect the Doctor has had on us over the years. As such, it’s a joy to be able to host a pal of mine, the estimable Simon Pearce, with his story of how important Doctor Who has been in his life. Travel hopefully – the universe will surprise you. 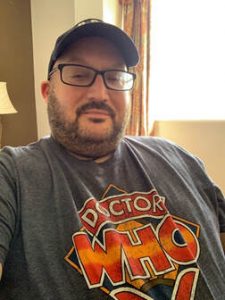 Doctor Who has been a huge part of my life since childhood. ​ I started watching around 5 years old, in Tom Baker’s last season. My mum was a big fan, and allowed me to watch it with her. The first episode I really recall, is Full Circle. Although I may have watched earlier stories cuddled up on my mum’s lap. As the years went on, The Doctor was my escape. I was bullied incessantly at school, and coming home to watch Doctor Who on the television (the scheduling changes in the 80’s meant I was able to watch on weeknights thankfully), or one of the few VHS tapes we had, allowed me to forget about the hell of school. Peter Davison’s Doctor became one of my favourites because of this through his few years in the role. His optimism, his coin-flipping decision making, and those three words. Brave Heart, Tegan. I keep them with me to this day. I looked to the Doctor whenever I felt low. And he kept me strong. I enjoyed the Sixth and Seventh Doctors too, but not as much, and I began to look at other things. As you do when you’re growing up. And I barely noticed when it was taken off the air. Through the early 90’s I enjoyed reading the novels at the library, and the continuing Doctor Who Magazine, but it didn’t feel the same. And I drifted further from The Doctor. That said, I was ecstatic when it was announced it was coming back in 1996. I hoped, as we all did, for a new series. The TV movie was great, but sadly the series was never commissioned and again I let The Doctor go for another 9 years. By the time 2005 came around, I’d spread my wings and moved from London to the North East. Finally we got a new series, and I fell in love with the show all over again. I started collecting again. The DVDs of the Classic era, as it became known, books, figures, all sorts. Then Facebook happened. Lots of Doctor Who pages and groups were created. I joined a few and made many friends. Some I’m still friends with to this day. Some, are as close as family. I even met my wife on there. Because of Doctor Who. At the end of 2011, I took over the running of a fan page dedicated to the Classic Years. In August 2012, Lucy found the page. Started submitting lots of photos for me to use. 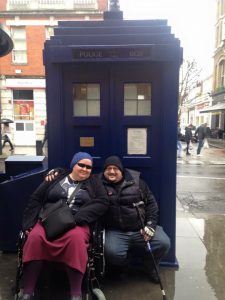 We got talking, and eventually I asked her to help me out. Lucy agreed and became co-admin. Because she was in London, we were at opposite ends of the country at the time, so that’s all we were, Facebook friends. Towards the end of 2012, I fell ill, problems with my asthma initially. And in all the time I had off work because of that, I started getting really depressed. Almost to the point of ending my life. The one thing that stopped me? The Doctor. Re-watching old episodes, old stories. Reminded me there were people out there that love me. That I wasn’t alone. That I’d hurt them immensely if I did that. And I couldn’t bring myself do that. I felt like I would let them, and The Doctor, down. I felt so alone, but there was one line Sarah Jane said in Journey’s End – “You know, you act like such a lonely man. But look at you. You’ve got the biggest family on Earth.” – that made me sit back and think. Made me realise I wasn’t as alone as I felt. So once again, I leaned on the Doctor to get me through the dark times, as I had in my school days. Doesn’t matter which Doctor I watched now. Had more choice and more ways to watch 20-odd years on. They all helped. They all provided the crutch I needed to carry on. The Doctor’s morality. The constant fight of good against evil. The love between The Doctor and his companions. The fun of a lot of the stories. My illness carried on all through 2013, and into 2014. I was eventually diagnosed with COPD and diabetes type 2. The Doctor saw me through some tough times those two years. In late 2013, I came back to London for a few days to visit my mum for her birthday. Lucy and I decided that as I also had some spare time, that would be a good time for us to meet up for the first time. Which we did. And we sat and watched Tomb of the Cybermen. A day I shall never forget. The first Doctor Who we watched together. ​ But then I went back home to the North East and thought that was it. Didn’t know when or if I’d see her again. May 2014 came around. I was still off work. My depression got worse, and after an intervention from a friend, my family eventually moved me back South to live with my brother in Kent, so they could look after me. I’d quit work so I could move back. My brother lived in Dartford. And there were times I was bored while he was working, so I’d go wander round the town, and I found a great tattoo artist. Over the next few months I had him tattoo a TARDIS design on me, a Dalek and a Cyberman, so in a way, the Doctor would always be with me. ​ By August 2014, I was feeling a little better and Lucy wanted to meet up again, as I was now living a lot closer. So we did. And we fell head over heels for each other. I started spending more time with Lucy than I did back at my brother’s place! We started dating, but only a couple months later in October 2014, Lucy was diagnosed with terminal bone cancer. The hospital staff took samples for a biopsy, and I said to Lucy if it comes back with the worst possible diagnosis, we’re getting married – and she agreed! It did, so, we did. ​ 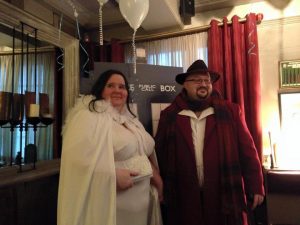 We arranged it all in less than eight weeks. And in December, we had a Doctor Who themed wedding (what else!). Me as the Season 18 Fourth Doctor, and Lucy as Mary Tamm’s Romana (Romana’s white dress was a perfect inspiration for a wedding dress). My wonderful step-mum even made us a Doctor Who wedding cake. ​ Over the next few years, we merged our individual items, and built up a huge collection of Doctor Who merchandise together. This included every DVD that’d been released, every Target novel, various figures, Big Finish audios and even a near life size plaster cast model Davros head! 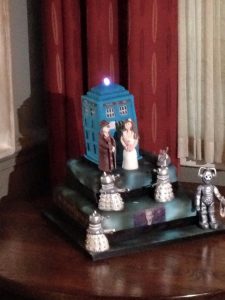 We attended conventions and signings together. Lucy was an amazing artist and put together a great gallery of Who artwork on the Deviantart website, and through Facebook we continued our Classic Years page. Sadly, Lucy passed away in February this year. We had 4 and a half great years together. The funeral program had a TARDIS design. And of course, Lucy had asked for a piece of Murray Gold’s Doctor Who music at her funeral! We even agreed before hand that I’d have a Doctor Who memorial tattoo in her honour – the Tom Baker diamond logo, as that was the era we both started watching. Since then, life has been hard. I’ve been struggling to cope with her passing. But again, as before, The Doctor has provided a light in the dark. Sometimes I’m ok, but when I’m feeling low, I’ll stick Doctor Who on, and remember the good times. I’ve been involved with a couple of other fandoms over the years, Star Wars and Batman. But I’ve pretty much walked away from them since Lucy passed. Fell out of love with them. Somehow, it’s only been The Doctor that’s managed to keep me going. ​ And through Jodie Whittaker’s new Doctor, I believe she will continue to do so. 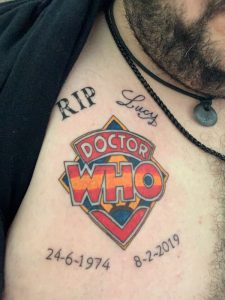