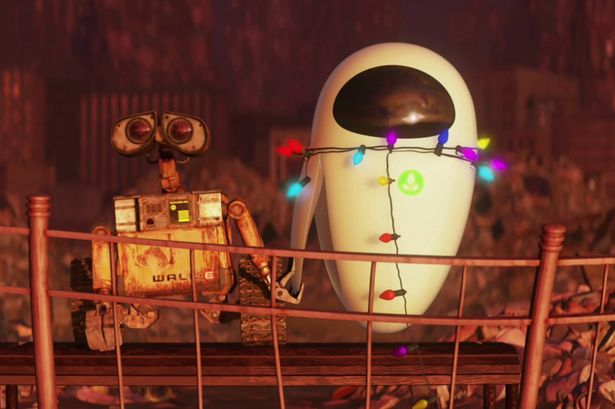 That’s the story of Wall-E and EVE, the story of a love between a good-‘hearted’ regular Joe, and the hottest, coolest, most ass-kicking environmentalist on the planet. Love, it tells us, is a matter of who you are, how you feel, what you share, and what you do when the chips are down, rather than what you look like or how high-falutin’ your job may be. It doesn’t matter if you’re rusty, with lappy caterpillar tracks and a squeak and a sense of purpose which others might see as pathetic and hopeless. Be you, live your truth, and love can find you.

Wall-E, for those who’ve never seen the movie, is a plucky, resilient trash-compacting robot, left alone on the planet that once was Earth, to tidy up the garbage heap it’s become by the time human beings leave it and head out to the stars. He’s the least considered, most forgotten janitor in the history of the world, but he doesn’t whinge, doesn’t wail about his lot in life – he does what he was built to do – searching the garbage, compacting what he can, making use of what’s around, playing with his buddy, a cockroach, and more or less filling his days with work and what could be described as a positive mental attitude. He’s been doing his job, uncomplaining, for 700 years by the time we meet him.

It’s only when Wall-E allows himself some chillaxing time at the end of a day that we see what’s really missing in his life – observing a view, or a movie, he’s come to understand the need for someone to share it with. Seven hundred years of thankless, relentless slog on a mostly barren planet has taught him loneliness. 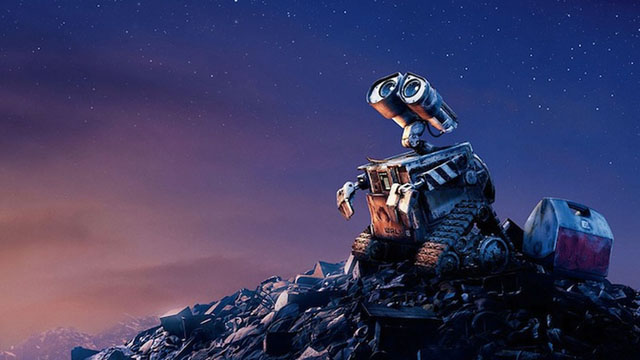 But loneliness is just another part of the job, and Wall-E powers up the next day and gets on with his work. In fact the movie takes great pains to show us that loneliness is by no means all that seven hundred years of cleaning up the crud left behind by an absentee humanity has taught him – in the great traditions of both Disney heroes like Dumbo, Pinocchio, Bambi and Baymax from Big Hero 6, and other unconventional film heroes like Number 5 in Short Circuit, ET and Chappie, we’re shown early on that he’s developed an insatiable curiosity, a taste for music, an understanding of kindness to other creatures, and a sense of stewardship that goes beyond emulation, both in terms of the giant skyscrapers he builds and of the world in general. When he finds what looks to be something entirely new – a living plant on the dead garbage-world – he doesn’t pluck it, doesn’t allow harm to come to it, but takes it and the soil in which it’s grown home in an old boot.

We’re also shown early on that Wall-E in himself and his curiosity is special, unique, the last of his kind – other Wall-E units are shown dotted about the cityscape, having stopped in their tracks one day. Wall-E, our Wall-E keeps on going, getting a daily solar recharge and going out to do his job, with the kind of chirpy (but not too chirpy) sticktoitiveness which the initial American audience, and then the audience around the world would be proud to think was an emulation of some of the best characteristics in humanity, contrasting sharply against many of the worst traits we have as a species, personified by the actual humans in the movie. This one little robot has kept on keeping on, powered by sunlight and that curiosity for new things, doing the jobs we never cared quite enough to do. That, in essence, is the ‘heart’ of Wall-E, the thing that deserves to find a companion to watch his love stories with.

None of that would matter of course if there wasn’t someone around to see the beauty of his heart. Enter EVE, a super-duper slick search and rescue droid, being sent out by ‘humanity’ to find signs of sustainable growth in Earth’s planetary soil. 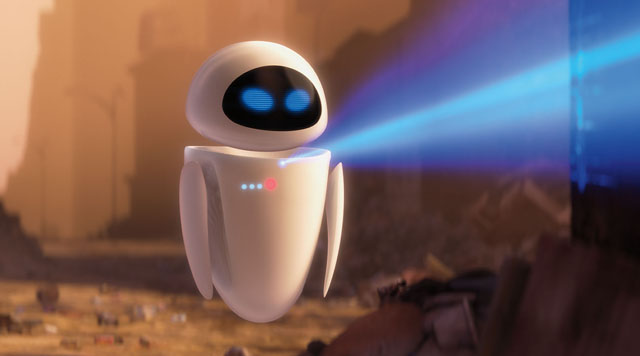 Their relationship is built on a realistic, humanistic pathway – he first falls for her when he sees her free of the responsibilities of work, flying and effectively dancing like there’s nobody watching, and the beauty and expressive creativity of it enflames his curiosity about her. Slowly, they grow to accept each other’s presence on the planet, and some similarities emerge between them despite their technological differences – she, like him, giggles at the tickling presence of his cockroach friend in her systems. And when he saves her from a smogstorm and takes her home to his place, she gets to see everything he’s done, and he, like many guys trying to impress a girl throughout history, shows her his best treasures – the movie that he watches, the lighter that she instantly ignites, bringing a new flame to their relationship, the simple joy of popping bubble wrap and of dancing. His ingenuity impresses and his klutziness makes her laugh. But when he presents her with his ultimate prize, his plant in its boot, it rocks her world on a whole new level, and she shuts down. Then we see Wall-E the carer, keeping her dry and getting wet (and electrocuted) himself, taking her with him when he has to go somewhere, protecting her from future storms. All he knows is that she’s something absolutely special, and that he’d really like to hold her hand. That inspires him to keep her safe, and when she gets ‘EVEnapped’ by a spaceship, Wall-E the ultimate homebody doesn’t think twice before leaving his home and cockroach buddy behind, and clinging to the outside of a spaceship to be near her.

When they get to her home, the spaceship Axiom, their relationship goes through its mid-phase difficulty, but there’s a balance to it – she didn’t understand his world, but he kept her safe on it. He doesn’t understand hers either, and gets them both into monstrous amounts of trouble, but some robotic sense of loyalty, plus the mystery of what has happened to the ‘missing’ plant, leads her to keep him safe too, and his continuing sense of devotion, both to her and to the things that are important to her, breed in her a growing robotic ‘affection’ that sees them face down the threats of a system rigged to keep the status quo…quoing, and makes them fight, both side by side and separately, to expose the truth that Earth is once more capable of sustaining life, challenging and hard work though the revelation will be for the human crew of the Axiom, seven centuries into their ‘five year mission.’ 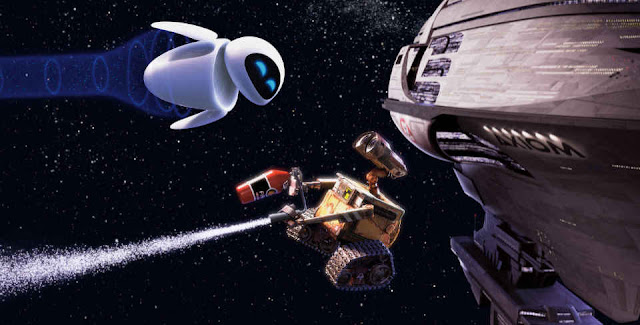 They may be from different ends of the technological spectrum, but Wall-E’s curiosity, his sense of humour, his dedication to EVE and everything that matters tso her, extends a bridge between them, and Eve, to her credit as the ‘senior’ partner in their romance, appreciates the quirkiness of him. Sure, he’s dirty and from the wrong side of the tracks, but who else brings her bubble wrap and Christmas lights, who sings her silly songs and wants to hold her hand, and most of all, who will absolutely have her back against a system that tells her she’s defective just because she’s inconvenient? This story of robotic romance hits many very human beats, because stripped of its ecological theme (which incidentally is superbly delivered), and its metallic shells (and even really its notion of gender – we only really identify Wall-E as male and EVE as female because the names carry male and female connotations in our understanding), this is a story with which we can all fundamentally identify. Perhaps geeks identify with it more than most, feeling that we’ve all been in Wall-E’s caterpillar tracks, smitten from afar by the most amazing creature in creation, but really speaking, it’s the Prince and the Showgirl, or Aladdin, or Notting Hill, re-framed and delivered in a way that strips away the importance of wealth and takes that relationship back to what it really is – first love, playground love, love so pure and all-consuming that you’d follow the loved one through fire if they needed you to. The kind of love that childhood sweethearts are made of, if they ever find each other, and can appreciate each other for their individual strengths and quirks and oddness and love and loyalty, even when they drive each other crazy or…y’know…accidentally electrocute each other. Wall-E and EVE are a couple that probably grow old together, each doing their thing in their own way, and coming back together a little before shutdown each day, for a movie, and to share the new things they’ve experienced that day, and maybe even for a cockroach tickle, before powering down hand in hand, ready to reboot the next morning and do it all again. And that, when you get right down to it, is the stuff that Happily Ever Afters are made of.