Tony sides with the Sluts. 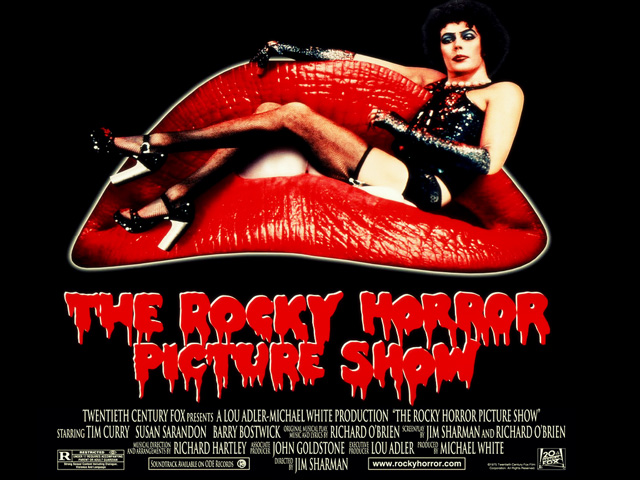 This world is divided many different ways on any given day, but one of the axes around which it splits turns forty this year.

That axis is The Rocky Horror Picture Show, and it divides people as much today as it did four decades ago on its initial release. It divides them into – if you’ll pardon the parlance of audience partici…pation – Virgins and Sluts. The Sluts are easy to spot – they’re the ones who go to every screening they can, who cosplay characters from the movie, jump up at appointed times and dance in the aisles or on stages, and who come equipped to the movie with a whole range of props, to interact with the on-screen action in real time.

The Virgins…well, the Virgins are those who either haven’t seen the movie yet, or have seen it, and insist, as a friend of mine did this week, that ‘it’s just a bad movie. I don’t understand what all the fuss is about.’

Let’s see what the fuss is about, shall we?

Firstly, a note of honesty – yes, if you just sit home alone and watch The Rocky Horror Picture Show on your TV, it’s probably a bit of a lame experience. Yes, it’s still got some great actors in it – Susan Sarandon, Barry Bostwick, Charles Gray, Tim Curry, Patricia Quinn…erm…Christopher Biggins… and yes it’s a love letter to the great sci-fi B-movies from the 30s-70s, but the plot is mayhem, the narratorial intrusion is probably the antithesis of good storyteling, the pace is slack, the conclusion insane, and if you’re not particularly broad-minded, there’s every chance that what was intended as a tribute-cum-parody of those great movies might insult your sensibilities with its gender-ambiguity, its transvestitism, and its camp-as-Christmas shenanigans. Seen alone, there’s every chance you’ll miss the point of The Rocky Horror Picture Show, and remain a Virgin for the rest of your life.

There’s a cure for that.

Shared Memories
Like most cures for virginity, the clue is in the company you keep.

First of all, don’t see Rocky Horror on your own. See it with friends.
Will that make the movie better?
Doesn’t it make most things better?

Apart from anything else, see it in company and whatever your reaction to it is, it’ll be a reaction shared, and that’s the beginning of a memory. And if you want to know what the fuss is about when it comes to Rocky Horror, that’s the essence of the answer – shared memories of the experience, whether those memories are of running round collecting all your props and sequinning your Columbia cosplay or trying to find a basque at short notice, or whether they’re just of watching all the people do their thing, and trying to catch up with the audience participation. Even if you watch it at home with someone else, you can swap questioning eye-rolls about what the point of that line was, and suddenly you’re building a memory of that moment.

Vive La Revolution
Secondly, part of the point of what’s already in the script of The Rocky Horror Picture Show is revolution. It slams the cultural clichés of all those marvelous B-movies right into the culture of permissiveness and what were in the 70s thought of as ‘alternative sexualities’ – yes, really, still. There was something shocking about a sweet, white-bread all-American couple running into a proud alien transvestite omnisexual and seeing them succumb to his way of life by expanding their own. But by making up your own interactions – whether they’re the time-honoured audience participations or not – you can engage with a meta-film experience (yes, really, I just said that), stepping outside the boundaries of dialogue. Everyone likes a good shout at the TV now and again, but you’re rarely allowed to do it in a movie theatre. Both the structure and the history of Rocky Horror allows you to do that – you get to heckle a movie screen, in an atmosphere where it’s perfectly acceptable and where – it’s unlikely after forty years, but you never know – your interjection might even make people laugh if they’ve never heard it before, might even begin to be a part of a local ‘accepted’ call-back, and from there, make it into the worldwide anti-script that is the Rocky Horror audience participation ritual.

Permission To Be Silly, Freedom To Be Yourself
More than anything else though, Rocky Horror gives a whole group of grown-ups who should know better, but frankly don’t, permission to be incredibly silly in a supportive group environment. Given that the movie first came out in 1975, these are the people, more than any other, who invented live cosplay at screenings, so before you sneer, kindly straighten your bow-tie and doff your fez in their direction. Rocky Horror is a movie, yes, but as Roger Ebert said of it when he initially reviewed it, it’s actually more of an ongoing cultural tradition. It fed into spirits like Mardi Gras and Pride; the Sluts who dressed as Rocky Horror characters were likely to support people’s sexualities and lifestyles in the real world once they’d grown to love Tim Curry’s strutting self-proclaiming Sweet Transvestite, who was as keen to make himself a man for frankly anal funfests as he was to deflower the sweetest American virgin in Sarandon’s Janet. While the message of the movie may well be that self-indulgent hedonism can go too far – after all, there’s murder and cannibalism later on, and the eventual twist is that Frankie’s gone too far and must be punished – from the 70s right through to the modern day, Rocky Horror has been providing geeks and Sluts with not only shared experiences, but a shared environment to be incredibly silly in public, and to be themselves, with whatever kind of strut they choose, empowered by the characters acting out the script on screen, and loved unconditionally by the audience subverting the bejesus out of it in movie theatres.

Don’t Dream It, Be It
Ultimately, no-one’s going to convince you to ‘stop worrying and love Rocky Horror.’ Certainly, you shouldn’t do it just cos all the cool kids do. But don’t watch it alone and expect to get the best out of it. That’s like watching Doctor Who with the sound off and no subtitles – sure, you’ll still see what’s on the screen and be able to get the gist (Rocky Horror could never be accused of any crime so monstrous as subtlety when it comes to its core themes), but don’t just watch it – be a part of it if you ever want to experience what the fuss is all about. Go along to a screening. Do some research first if you want, though that’s not necessary – most Rocky Horror fans are beautifully gentle with Virgins. Give yourself over to absolute pleasure, absolute silliness, absolute freedom, and see if there’s not an extra sweetness in your strut on the way back home.

To read the piece in context, go to WarpedFactor.