Tony continues his journey through the I, Davros series… 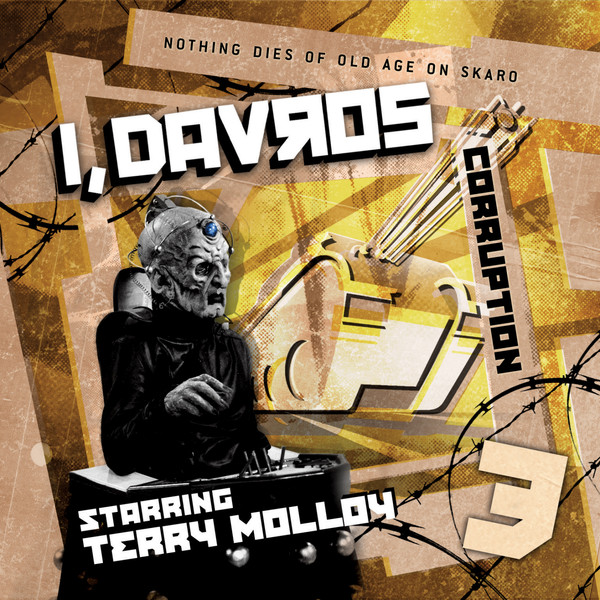 The original idea of I, Davros was taken from a blend of two ideas – showing the life and career of one of Doctor Who’s greatest and most psychologically fascinating villains up to the point at which we first met him in Genesis of the Daleks, and giving the context of his rise to power in a style similar to the Robert Graves epic (or rather, its BBC adaptation), I, Claudius.

In studying the great rulers of history, their connections to other people will either have been a strength to them or a weakness, and I, Davros follows the I, Claudius route fairly faithfully as far as that’s concerned. In I, Claudius, the wives and mothers of the emperors are notoriously painted as interfering, homicidal or lustful to the point of almost toppling the empire. In I, Davros, there are three women throughout the course of his life who either support or threaten Davros’ career. His mother, the thoroughly twisted Calcula, was his most adoring exponent. His sister Yarvell was frightened by the turn of his mind and found herself on the opposite side of the ideological fence from him, with horrifying consequences.

Corruption finds Davros an older man, his career In the Scientific Corps progressing with unparalleled clarity and focus – he has become its leader, and has devised, almost to order of necessity, devices to help make Kaled victory a certainty, to extend lives, to target Thal physiology and biology… and to experiment with the effects of radiation on the Kaled genome, to extrapolate the species to its final logical form. If Calcula was interfering and Yarvell was perversely homicidal, it would be entirely wrong to think of Shan as lustful. In fact, neither she nor Davros appear to give much thought to the needs of the body – but she is an excellent scientist, and they work closely together, so it is perhaps forgiveable that non-scientists begin to look at them as a potential couple despite their age difference. It’s a point unsentimentally made that Skaro is a planet in need of breeders and for some time the idea of a marriage between the two scientists is mooted. We can only imagine what would have happened to Dalek history had such an alliance taken place. Would Davros have been saved from his own arrogance, from the direction in which the Daleks would eventually be developed, had he become a husband and a father? Would the ruthless demands and conclusions of science been softened by the compromises that marriage demands or the glow of self-renewal of seeing his own child, made in his own image, on his knee?

Possibly, but possibly not – Shan is actually instrumental in pointing out a vital component that pushes Davros in the direction he eventually takes. But whether love would have blossomed between the two to dull the edge of his scientific urgency becomes spectacularly and horrifyingly irrelevant for two reasons. Firstly the adamantine strength of will that Davros has displayed throughout the series, from his teenage determination to decide his own destiny in Innocence to the furious need to rise above mediocrity whatever the cost in Purity, surfaces again, and he decides their respective fates for them.

And then we hear the moment every fan knows about. The moment Davros becomes Davros. The attack that renders him blind, immobile, dependent forever on his life support system, his microphones and sensors. And, kept alive by systems, most of which he devised, everyone expects Davros to take his own life.

But Davros lives. What’s more, with a perversity of fate, he becomes the Kaled most likely to die of old age, protected from the ravages of time and decay by the systems of his chair. What’s more, this is the moment that Davros psychologically becomes the creature we know – freed from the understanding of the Kaled as a physical creature, and thinking now purely in terms of the purity of their DNA, he will distinguish himself from those around him as they disappoint his understanding of the race’s potential. In terms of Corruption, it’s a theme that permeates throughout this episode – the corruption of ideologies, from winning the war through strength to achieving a peace through diplomacy, a fatal corruption as Davros sees it which dooms any connection he might have made with Shan. The corruption of politicians in the case of the Supremo and the Council, the uncovering of which which allows Davros at the end of this episode to essentially render the Supremo nothing but a figurehead for the power bloc that the Scientific Elite has become. The corruption of Davros’ body of course during the attack that puts him in his chair, a Hitler parallel of significant power – the Kaleds, so intent on the purity and superiority of their race, will be all but led by a crippled scientist very far from their ideal of Kaled perfection (just as Hitler – a small, dark-haired, dark-eyed Austrian – led a government based on the purity of the blond-haired, blue-eyed, German supermen). But mostly, the corruption here deals with that separation of ideas – Kaled purity at a genetic level, and its degeneration over the recent decades of the war, leading to Davros’ research to find the ultimate form of their species. Corruption, while it preserves the purity of the genome, has always been an idea that Davros could understand, but now, with the corruption of his own physical form and the clarity of purpose that gives him, he begins to turn his researches furiously in that direction – research with newborns, research with embryos, to essentially speed up the ‘corruption’ of the Kaled form into its ultimate version, to achieve the salvation of the species while there is still time.

Corruption – volume three of the I, Davros story arc, written by Lance Parkin, delivers two of the most pivotal moments in the development of the Kaled scientist into the monster we know from Genesis of the Daleks and subsequent stories. It is essentially the last chance of Fate, the possibility that Davros could be saved from the destiny his arrogance, his scientific determination and his ideological obsession will lead him to. And once that possibility is gone, it shows us the moment of no return, the moment when Jekyll drinks his potion or Frankenstein throws his switch – the moment when man becomes monster. In terms of the I, Davros storyline, it’s in Corruption that the balance shifts from explaining what he was like before we knew him to his emergence as the villain we know. But it will still take one more hour to get from Davros’ rebirth to his self-renewal as father of the Daleks.

To read this piece in context, visit WarpedFactor.