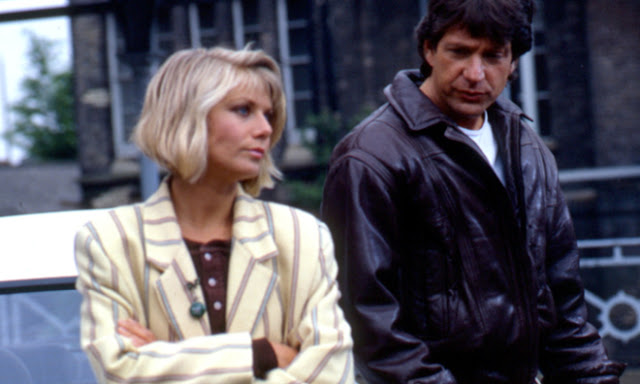 But if you were a British teen in the mid-80s, there was only one odd couple cop show you cared about – and that was Dempsey and Makepeace.

Dempsey and Makepeace had everything – kicking 80s theme tune, London backdrop in the mid-80s, when the city was where every kid who wasn’t there wanted to be, cool New York guy Dempsey, played by easy on the damned eye Michael Brandon, ice hot posh girl Harriet Makepeace, known gloriously as Harry and played by Glynis Barber (then riding high on the back of her role as Soolin in Blake’s 7 and eponymous hero Jane in a show that dabbled with combining live action and early CGI), preposterous plots with just enough taking it seriously from the two leads to convince you they were realistic, and a love story that gave no quarter and didn’t stop either of the central characters from being able to kick your ass if you got out of line. It was like smashing Starsky and Hutch’s equality of partnership together with the coolness of the Avengers’ women like Kathy Gale or Emma Peel, and for the first time, being in a decade where that equality of lead status was acceptable without being played for cute.

While set in contemporary London, and somewhat fetishizing the city as the place where all things were possible, it still, in its day, carried a note of fantasy, showing British police carrying guns, which elevated it from standard British police fare to special unit status, immediately putting it in the category of shows like The Persuaders and The Avengers. But there was far less whimsicality in Dempsey and Makepeace’s special unit, SI 10, than was allowed in those other shows – they carried guns and got involved in demented situations, but they were always, by the standards of their predecessors, comparatively believable and played for real, more likely to deal with drug smugglers and financial swindles than megalomaniacs intent on taking over the world. 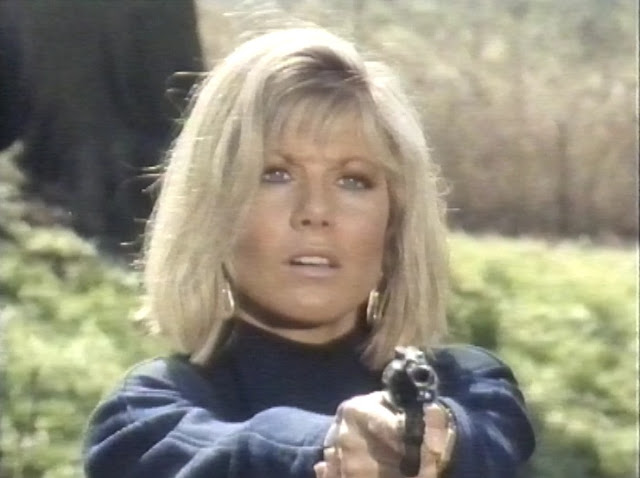 The dialogue too was a cut above some of those other Brit fantasy shows, the writers basing their work more in character than cheesy lines and plot developments – that was what made Dempsey and Makepeace quite so hard to quantify: it sat between the hard-as-nails British cop shows The Sweeney and The Professionals and those more fantastical shows, The Avengers and The Persuaders. But always, if given a choice, it fell on the hard-as-nails side of the coin.

What Dempsey and Makepeace had above all the shows of its ilk that came before (and arguably after it) though was chemistry. That was because there had never been an odd couple cop show where the cops were destined to fall in love – the very same year in the US, Bruce Willis and Cybil Shepherd were beginning the same journey in Moonlighting, but with more comedy and a heaping helping of cheese which was denied the comparatively gritty British offering. The chemistry factor was brand new in the arena, almost by necessity – there was never any special chemistry in The Avengers, and it would have been unthinkable for broadcast in the 70s had the Starsky and Hutch bromance become anything more, but this was the 80s, and Harry Makepeace could more than hold her own with the boys (in fact, in the very first episode, she entirely flummoxes Dempsey), so it was suddenly the right time for an odd couple cop show that could become an odd couple romance, while still delivering all the villain-kicking and villain-shooting action a nation of crime-geeks demanded and giving 80s girls a role model, albeit one with a silver spoon in her mouth. 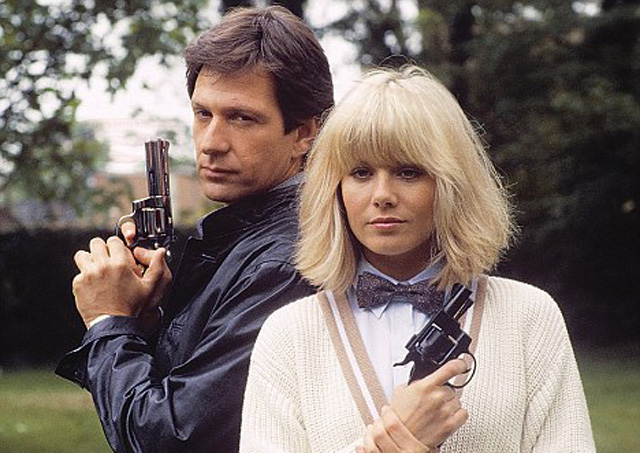 Unlike the Moonlighting vibe, Dempsey and Makepeace’s romance was played in a typically British fashion – understated, quite frustrated and never entirely resolved, though the final season saw them getting closer and closer to some resolution of their feelings. But in many ways, the show delivered an archetype for crime shows and crime novels for the next thirty years and counting, where police business and personal emotions are mixed and twisted, duty and passion fighting for control in a situation made impossible by convention and rules, but impossible to ignore by the dictates of the heart. The chemistry at the heart of the show eventually developed into a real-life romance between Brandon and Johns, and on into a marriage which continues to this day.

The legacy of Dempsey and Makepeace is a peculiar one – from the dawn of the 80s, British drama had begun to show working policewomen as heroes – in 1980, the BBC launched Juliet Bravo with Stephanie Turner as Inspector Jean Darblay, who was followed in the same show by Anna Carteret as Inspector Kate Longton, both fighting a combination of crime and the residue of 70s male chauvinism. The show ran until 1985, and while important in its own right, there was a degree of rural charm to the whole thing, set as it was in Lancashire in the north of England. During the same period, ITV, the UK’s commercial channel, was running The Gentle Touch, a much edgier, London-set show, with Jill Gascoine making UK TV history as the first woman to headline a British police drama, as Detective Inspector Maggie Forbes. Both shows had ended the first wave of female cop shows in the UK by 1985 (while in the US, Cagney and Lacey was hitting its stride as a more straightforward ‘female Starsky and Hutch’ take on the situation). Dempsey and Makepeace picked up one half of the baton, with Jill Gascoine continuing to run with the other half in a follow-up show called C.A.T.S Eyes, launched the same year. C.A.T.S Eyes took the idea of female empowerment forward in a mostly female environment (the show was set in a secret unit, fronted by an all-female detective agency, and actually had more in common with Charlie’s Angels than The Gentle Touch). Dempsey and Makepeace took the mantle of ‘woman kicking ass in a world that men still think is their own’ and turned it into something intensely watchable, establishing Makepeace as being able to more than handle herself, without in any real way diminishing Dempsey’s skills or his ability to likewise look after himself. If the first half of the decade had been about policewomen fighting to be taken seriously in British society and culture, Dempsey and Makepeace was an olive branch that said ‘We’ll still kick your ass if we need to. But if we don’t need to, we can work with you.’ It set the seal on more equal partnerships between men and women in police procedurals for at least three decades to come, and rewrote a formula which is still paying writers dividends today.

To read this piece in context, go to WarpedFactor.