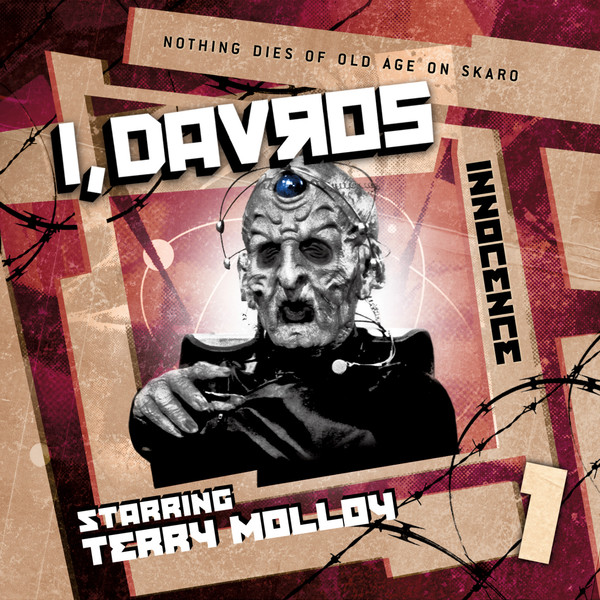 Even the name stuns with its scope, doesn’t it? Someone dared to write the backstory of Davros? Someone who wasn’t Terry Nation?

Yes, someone dared – Big Finish, years ago, and as a kind of adjunct to its main Doctor Who range, decided to take what we know about the creator of the Daleks and dare to extend him backward, back beyond Genesis of the Daleks, to explain the life and path of everyone’s favourite psychopathic genius. It’s a story partly inspired by the line in Genesis – if someone pointed out a child to you and told you that he would grow up to be a ruthless dictator, could you then kill that child? It’s a line and an idea that persistent rumours suggest we’ll see realized on screen in Series 9, but long before that ever was dreamed of, Big Finish was there.

The tone of the four hour-long episodes of I, Davros is exactly what you might expect it to be, given that title – it’s a saga of family, and of one man’s journey to the seat of ultimate power: it’s Robert Graves’ I, Claudius smashed together with Terry Nation’s Skaro as we see it in Genesis. The Roman Empire, locked in a dirty war of racial purity.

The set-up is simple – the Daleks have Davros, the Davros we know, voiced by the always-impeccable Terry Molloy, ‘on trial,’ but not in the way you might expect. They need guidance, they need direction because battles are being lost. He strives to help his fallen creation by looking to the lessons of the past. His own past. These moments of Davros and Dalek interrogation are mostly framing devices, but they still allow for a healthy dose of shivers down the spine at the beginning and end of each episode.

Episode 1, Innocence by Gary Hopkins, gives us that most unimaginable of gifts – Davros as a boy. It also gives us his place in the society: for those of you who know your I, Claudius, or indeed your Roman history, he is Caligula – a boy of brightness and promise born to a family of power and wealth. His father, Nasgard (played with serious acting chops by Richard Franklin) is an officer at the front, his mother, Calcula, a political player at home. His sister, Yarvell – oh yes, Davros has a sister – regards him, as all sisters do to all brothers at a certain age, as an idiot, a pain. But there is something solitary about Davros. Something self-possessed and extraordinary. He has a fascination both with science, particularly biological science, and with the history of Skaro, the different races that have existed on it. Yes, we see, albeit vaguely through a glass of history, a Skaro on which there were other sentient races besides the Kaleds and the Thals, the other races wiped out by the constant battle for supremacy, till only the two warring nations remain.

Davros is almost obscenely idolized by Calcula (a touch of Nero dripped into the Caligulan template), while Yarvel supports her father more often. Calcula and Nasgard themselves never seem a happy couple, and ultimately, only one of them will survive to the end of the first episode. Nasgard’s interfering sister Tashek is on hand to stir the pot, provoking some critical action in the first instalment, and beginning the slow collapse of the dysfunctional house of cards that is the family of Nasgard, the environment in which Davros grows up – surrounded by plots, counter-plots, secrets and lies.

Not that Davros himself is any shrinking violet – far from it. He remembers spites and slights, has a succinct adolescent contempt for adults he regards as inferior to himself, including his sister, and in particular, he has a cold, furious dislike of a man who dares to give him lessons in science – Magrantine. As the Nero parallel begins to grow in power, Calcula is moved to extraordinary measures to protect the future she sees for her son, and Davros himself takes his first blood as a teenager. The power of their mutual protection is cloying, obscene, and sickening, and there feels like another influence at play beyond the I,Claudius parallel. There’s something almost akin to Damien Thorn in the young Davros, played with a clipped precision by Rory Jennings, as people who threaten him or his future are moved or removed from the equation of his life, either by his own malign influence or by those who seek to protect him. It’s a thoroughly creepy piece of audio, and it’s compelling from start to finish.

It’s actually in the mask and its occasional, almost casual removal, that I, Davros 1 is at its most shocking – the mask that belies what we know what this boy will become. We know we shouldn’t trust him, know it from long experience of the adult, horrifying Davros. But here, he’s just a boy…surely? That’s the point, isn’t it? He’s just a boy, molded by the world he lives in, the influences he’s exposed to? And to some extent, yes, he is. But Davros is never just a boy. Like the poster of the young Anakin Skywalker casting Darth Vader’s Shadow to advertise The Phantom Menace, or the poster of a young Damien Thorn surrounded by crosses of the dead to advertise the original Omen movie, we see the teenage Davros casting shadows rippled with Dalek bumps, consuming a dead planet. But whereas Thorn’s destiny was a matter of prophecy, and Skywalker’s a matter of the Force, what really succeeds in shocking us in this episode is the moments when that mask of ‘just a boy’ drops and the sheer driven power of self-will and mission glints in his voice, in his actions, Jennings managing to create something truly unnerving from the overused archetype of the creepy child.

Be warned – if you listen to I, Davros 1, you’ll be in it for the whole set – four hours of origin story that drag you along like the best of page-turners. But then rejoice – each episode is just £5 from the Big Finish website, so for just £20 you get the whole Davros journey, from his teenage years to just before Genesis. You also get some of the genuinely best audio storytelling the company has delivered in fifteen years, played by a cast that reads like a Who’s Who of Big Finish alumni – Lisa Bowerman, Lizzie Hopley, Richard Franklin, Scott Handcock, Carolyn Jones, Nicholas Briggs (in an unmodulated role, no less) and more. In case history’s about to be rewritten by the TV show, listen to I, Davros now, and remind yourself what any on-screen history of the young Davros is up against.

To read this piece in context, go to WarpedFactor.