Return of the Classics – Second Doctor 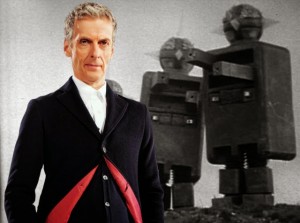 Will the Twelfth Doctor feel the Power of the Quarks

Tony continued his look at villains that are due a re-match in the 21st century. This time – the Second Doctor.

Read the piece on WarpedFactor here.

Power of the Quarks
No wait, listen, come back, I’m not as nuts as that title might make me sound. The Dominators were a physically striking pair of miserablists, a long way from home and desperate for fuel, but clearly, home was somewhere where they instilled fear through brutality – you don’t swan around the galaxy calling yourself Dominators unless you have the oomph to back it up, you’d just get laughed at for your sloping shoulders and silly haircuts and told to go and cosmically do one.

What was the source of that fear? What gave the Dominators their dominion? Believe it or not, it must be the Quarks. Yes, they were very silly looking and silly-moving, bless them, but, perhaps except the Chumblies, have you ever seen a robot more ripe for a 21st century, Robert Shearman Dalek-style re-vamp? Make the Quarks as threatening as they should have been, reveal previously untold power in those spiky-headed, offset-armed little beggars, and crucially, show us the Dominators’ home – the empire they’ve supposedly conquered and dominated through the use of these ultra-robots. Give us a home world oppressed by fear of the power of the Quarks. Then introduce the Doctor and Clara and set them on the path of opposition. Imagine the Doctor instilling a kind of conscience sub-routine into the Quarks, giving the Quarks a kind of sentience all of their own, and an Asimovian determination to protect non-Dominators. Revolution of the Quarks, here we come. And when the revolution comes, how far will the Dominators go to retain their power? Give them a chance to graduate to truly shocking villainy, and the Dominators could still make modern audiences clamour to see them again. 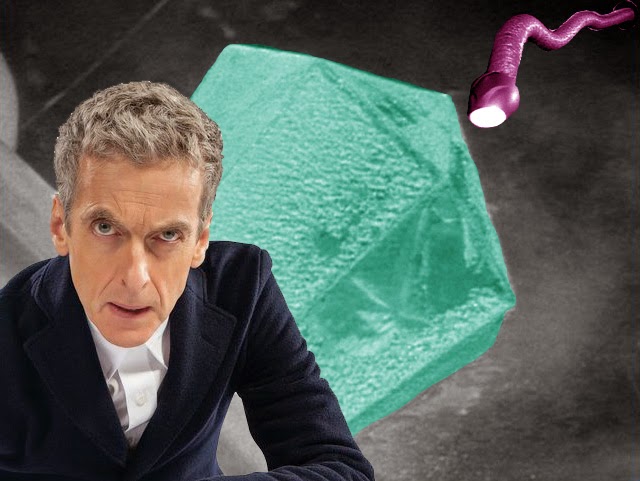 At the University of Shining Achievement, on the planet Selamin, two young researchers, bored with the rigidity of academic life, go snooping in dusty basement corridors to scare themselves and get closer to one another, as students do. They find a locked room and break in. There’s a bank of computers and a couple of headsets. Trying them out for a laugh, one of the students is horribly killed, while the other is merely hurt as lights flash, pumps pump and machinery comes back to life. The headset implants an explosive in the survivor’s brain, and the machinery creates a crystalline entity – a Kroton. The survivor is commanded to bring others and feed them to the machine. The Kroton needs a lot of mental energy for a purpose it won’t reveal.

The Doctor hates it at Shining Achievement. He popped in to return a book and to catch up with one of his previous incarnations old friends, who now he finds in his Twelfth incarnation, he really can’t stand at all. Then he hears about the disappearances. Students going missing – is there a serial killer on campus?

As it turns out, the Kroton has big plans. It needs imaginative mental energy not just to keep itself alive, but to funnel into subterranean systems – forgotten by most of the universe, Selamin is the planet of the Krotons. They’ve been in chemical hibernation in vats underground for a thousand years. Now, the disappearances are threatening to resurrect them and set them free in the universe to suck the minds of all intelligent, creative beings dry – unless the Doctor and Clara can stop them. As more and more students disappear, and more become pawns of the Krotons, can their resurrection be halted?

(NB – this was written before checking out Return of the Krotons from Big Finish. Flatteringly, there seem to be some areas of similarity, but also some areas of significant difference). 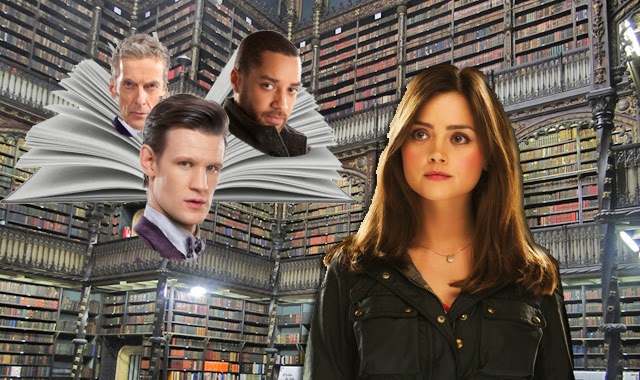 The Third Dimension
Where the First Doctor had the Celestial Toymaker and his toyroom, the Second Doctor introduced us to the mad white minimalist world of the Land of Fiction, ruled over by The Mind Robber. Over the last fifteen years, Big Finish has well and truly taken over the realm of the invented with a couple of stories that have been both a bit barmy and quite sinister. There’s a touch of The Crooked Man, as well as a little Sapphire and Steel, about an idea that I think could really work on 21st Century TV Who – the Tardis materializes in an enormous library full of people of various species, dressed in all manner of outfits. Reading. The Doctor claims they should never have been able to get into this library, as there’s an insane energy barrier that’s preventing them from getting out. They open the doors and find themselves walking in at the other side of the room. Someone here knows more than they’re saying, and the only way to find out who is to talk to them. As Clara exercises her people-skills, pages rustle on bookshelves, something skitters around corners, and the Doctor goes into the labyrinthine library to track it down. The people can’t remember much about who they are, or why they’re here. Then one of them touches Clara’s hand, and she feels herself forgetting – Danny, her dad, her gran, that guy with the big chin…

The people stand, and turn sideways, but they have no third dimension, and so look invisible. Clara turns her hand to look at it, and it disappears. This is not a library – it is the Vault of Secondary Characters, and they want out.

The Doctor finds what it is he’s been chasing. It’s himself. A traveler who’s become a hero, but who has no name. The other ‘him’ reaches out and touches him, and the Twelfth Doctor becomes the Eleventh, becomes the Tenth as the other ‘him searches his memories for who he really is.

Clara learns that the Vault is a facility created by the Realists – an organization of people with no imagination – to trap rogue, underdeveloped characters ejected from the Land of Fiction in a purge by the realm’s master. The Secondaries need a mind to carry them out of their prison and back into the Real World, to have their vengeance, both on the Realists and on their creators, before turning the worlds they live on as two-dimensional as they are. Clara’s mind could only serve as a lifeboat for a few of them. They need something more, and so they’re turning her into one of them, so she’ll con the Doctor into letting them escape in his mind, or that of the Tardis.

By declaring that he’s as real as his friends have always thought he is, the Doctor is able to defeat the ‘other’ him, which adopts its true form – an old, exhausted, weeping man; a previous master of the Land of Fiction, expelled with the Secondaries and forced to live alongside them as their gaoler. He can no longer remember how many of the Secondaries were originally characters, and how many have been ‘made’ from people who’ve found their way here and failed to provide the means out. He wants to be allowed to die, but can’t unless someone takes his place.

The Doctor discovers what’s been done to Clara, and uses the ex-master to re-tell her story to her, giving her back her third dimension. The exertion is too much for the ex-master, and he dies. The Doctor and Clara escape to the Tardis and the Doctor rigs up a pocket-dimension cube, keeping the library constant inside – the Secondaries will remain clueless of their own stories and the universe for the rest of time. 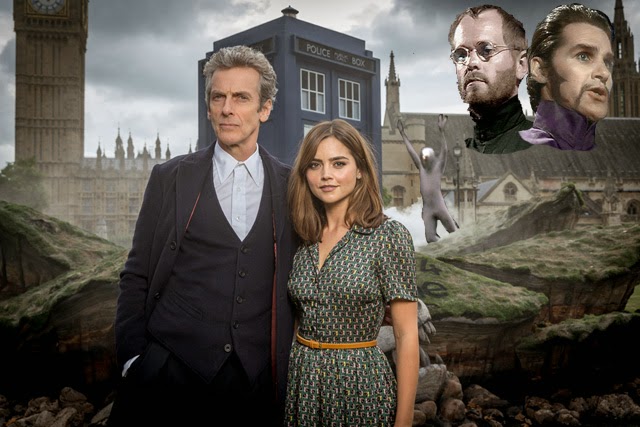 You’d need a series arc to even come close to the epic length of the original War Games, but that needn’t be a bad thing. In a post-Time-Lord universe, a gang of time-sensitive rogues have been observing some of the bloodiest conflicts in the universe’s history, and deploying their own cybernetic shock troops to ensure the result goes what they regard as ‘the most interesting way,’ irrespective of massively increased loss of life. The Doctor and Clara find their distinctive trail on a number of planets where they’ve toppled dictators, attempted to make peace etc, having fought Daleks, Cybermen, Sontarans, Dominators etc. The rogues think of themselves as the inheritors of the War Lords’ legacy, destined ultimately to make war with and defeat the greatest powers in the universe, and have been provoking wars and manipulating the Doctor’s interventions to take out some of the greatest challenges before assuming command of the universe of space-time. Ideally, end the series with the Doctor defeated and the New War Lords shipping cybernetic troops (can we say Raston Warrior Robot and leave your mind to boggle) across space and time to complete the conquest – leaving Clara and the Doctor to Do Something Clever At Christmas to restore the universe to its proper course.