The Bond series is always supposed to be ‘modern’ in that it’s supposed to keep pace with the times and threats of its particular era,

and deliver technology that is, perhaps, just a little ahead of those times. But if we’re looking at ‘modern Bond’ in 2015, before the arrival of Spectre, then Goldeneye represents the beginning of our era. Not a bad achievement when you consider it’s actually 20 years old, being released in 1995.

It had been six years since Timothy Dalton’s last Bond film, and the world had been turned upside-down in the meantime. The 80s were an era of phenomenal change, but it was the 90s that really began to see the effects of those changes – the Berlin Wall had fallen between the end of Dalton’s era and the making of Goldeneye. All change was the order of the day – Goldeneye brought not only a new Bond, but a new M, and a female one at that, Judi Dench taking the top job, as well as a new Moneypenny, Samantha Bond.

The end of the Cold War allowed for a looser backdrop – experience for hire, rather than dogmatic obedience – and it also allowed a shift in focus to perhaps a more realistic, less idealised view of the Secret Service as an organisation that got things wrong, that had consequences – and that sometimes would have to clean up the bodies and the mess of its malfunctions.

Stepping in to the tuxedo of death was suave Irish actor Pierce Brosnan, who had been in the frame for years to pick up the Walther, but who, on his closest previous brush with Bond, had been tied into contracts on TV’s fiction-within-a-fiction detective show, Remington Steele.

There are loose theories that Bonds are divisible by type – there are the harder, more intense Bonds (Connery, Dalton, Craig), and the smoother, more wisecracking ones (Lazenby, Moore – and Brosnan). That’s the alchemy at play in Goldeneye – the story is ultimately about an MI6 mistake, and the way the organisation has to be able to coldly move on with its business, while those with licenses to kill also have obligations to die. But against such intense, grim fare, you put a smoother, more smiling Bond in the middle to deflect and charm the audience.

If you want further proof that Goldeneye is the beginning of our modern era of Bonds, you could do worse than compare its skeleton with that of the latest Bond movie, Skyfall – both movies seem to be about shady villains, but are actually about former MI6 operatives gone spectacularly rogue. Both movies bring info-war and the power of computer aggression to the fore too, giving a distinctly similar feeling – betrayed ‘sons’ of the Service, using computing power to wreak havoc and pull off the ultimate crime.

It’s not all new of course – as once there was Pussy Galore, so Goldeneye brings us Xenia Onatopp, a villainess with a disconcerting sado-masochistic streak who kills men by crushing them between her thighs of steel. Jane Fonda, eat your heart out. And of course, it wouldn’t be Bond without a couple of staggering, outrageous set-pieces – the pre-credits bungee jump is positively quease-making, and the tank chase scene is sheer, wonderful, what-can-we-do-now camp bliss, most especially when Bond drives through a statue, and carries its figure, perfectly balanced for several blocks, including a couple of sharp turns. Delicious. Nonsensical in the extreme, but delicious.

Equally delicious is the inclusion of Sean Bean, towards the start of what is now his notorious career of not making it to the end of movies, as Alec Trevelyan, 006 – a kind of Moriarty to the Holmes of this new Bond. Bean and Brosnan are well matched – hard-edged, but quipping, Bean essentially giving us his Bond (because clearly, there could never be a blond Bond… erm…), but showing in three dimensions the dichotomy of Bond that’s highlighted by M when she calls him a Cold War dinosaur. Where Bond essentially belongs to an older generation (the generation that originally spawned him – Ian Fleming’s generation), Bean’s Trevelyan is able to point out his inconsistencies, his weaknesses and the contradictions of his personal recklessness and borderline sociopathy with his ‘Queen and Country’ Boy Scout motivation, and to expose those values we think of as being archetypally Bond as potentially quite outdated in the real world of the 90s. Not for nothing, but it’s another way in which Goldeneye provides the blueprint for Skyfall, this equal and opposite Devil’s advocate, pointing out the uncomfortable truth. 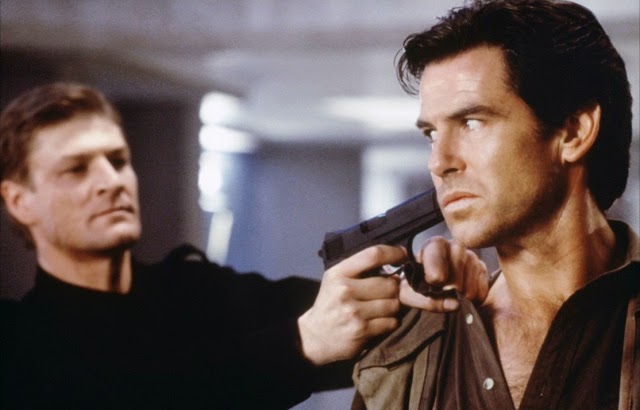 The central MacGuffin, the Goldeneye, is basically your traditional supervillain devastation-from-the-sky uberweapon, and the plot is actually a vengeance-against-London/let’s-get-incredibly-rich/financial-meltdown triple whammy, but there’s a certain Thunderbirds joy about it all as the film dispenses with all the Russian shenanigans and gets down to the clash of ideologies between Trevelyan and Bond, the boys with toys. On balance, Trevelyan’s got the better gizmos – giant antennas that emerge from under the water, space-based Star Wars weaponry firing EMPs to wipe every computer in Greater London and send a leading financial hub ‘back to the Stone Age,’ etc. The tone is always one of duality, with Bond and Trevelyan trading insults and Freudian analyses, and yet both showing the power of the MI6 mindset, doing whatever is necessary to get the job done. The final showdown on the giant antenna is where the psychology is played out, and Trevelyan’s assumption of Bond’s Boy Scoutism – the idea that he’ll always favour the mission before everything else – comes fatally unstuck when Bond essentially settles the score of what he feels is Trevelyan’s personal betrayal of him, rather than his treasonous betrayal of Queen and country.

Goldeneye began a new age of Bond movies – Brosnan lightening the portrayal of the character wherever possible, but still delivering an inner steel in terms of doing his job. The film brought Bond into the properly computer age, and perhaps more importantly, it did away with a lot of the baggage of rigidly dogmatic and nationalistic villains – the arch-villains Brosnan’s Bond would go on to face would frequently be rogues, individuals with personal agendas, or even ultra-capitalists, reflecting the post-Cold War realities of the world the audience understood. Perhaps most crucially of all though, to balance the essential machismo of Bond, the advancement of a female M would go on to give the Brosnan and early Craig Bond movies both a modernity and a tension that would elevate them above many of the earlier entries in the series. Goldeneye held the key to Bond’s future in the post-Cold War world, and it delivered complexity, deception, and ultimately a parable of two brothers with different takes on the same life. It delivered fun, action, even cod psychology, and a car chase with a tank.

As Bean’s Trevelyan remarks when he sees it – ‘Bond. Only Bond.

Read this and more pieces on Warpedfactor.com